Foam is an object formed by trapping pockets of gas in a liquid or solid. A bath sponge and the head on a glass of beer are examples of foams. In most foams, the volume of gas is large, with thin films of liquid or solid separating the regions of gas. Soap foams are also known as suds.

Solid foams can be closed-cell or open-cell. In closed-cell foam, the gas forms discrete pockets, each c

Foams are examples of dispersed media. In general, gas is present, so it divides into gas bubbles of different sizes (i.e., the material is polydisperse)—separated by liquid regions that may form films, thinner and thinner when the liquid phase drains out of the system films. When the principal scale is small, i.e., for a very fine foam, this dispersed medium can be considered a type of colloid.

Foam can also refer to something that is analogous to foam, such as quantum foam, polyurethane foam (foam rubber), XPS foam, polystyrene, phenolic, or many other manufactured foams.

A foam is, in many cases, a multi-scale system.

One scale is the bubble: material foams are typically disordered and have a variety of bubble sizes. At larger sizes, the study of idealized foams is closely linked to the mathematical problems of minimal surfaces and three-dimensional tessellations, also called honeycombs. The Weaire–Phelan structure is considered the best possible (optimal) unit cell of a perfectly ordered foam, while Plateau’s laws describe how soap-films form structures in foams.

At lower scale than the bubble is the thickness of the film for metastable foams, which can be considered a network of interconnected films called lamellae. Ideally, the lamellae connect in triads and radiate 120° outward from the connection points, known as Plateau borders.

An even lower scale is the liquid–air interface at the surface of the film. Most of the time this interface is stabilized by a layer of amphiphilic structure, often made of surfactants, particles (Pickering emulsion), or more complex associations.

Several conditions are needed to produce foam: there must be mechanical work, surface active components (surfactants) that reduce the surface tension, and the formation of foam faster than its breakdown. To create foam, work (W) is needed to increase the surface area (ΔA):

where γ is the surface tension. 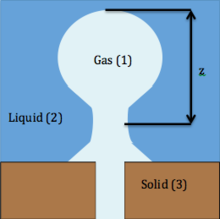 One of the ways foam is created is through dispersion, where a large amount of gas is mixed with a liquid. A more specific method of dispersion involves injecting a gas through a hole in a solid into a liquid. If this process is completed very slowly, then one bubble can be emitted from the orifice at a time as shown in the picture below.

One of the theories for determining the separation time is shown below; however, while this theory produces the theoretical data that matches with experimental data, detachment due to capillarity is accepted as a better explanation.

The buoyancy force acts to raise the bubble, which is

is the volume of the bubble,

where γ is the surface tension, and

In addition, if the bubble is treated as a sphere with a radius of

is substituted in to the equation above, separation occurs at the moment when

Examining this phenomenon from a capillarity viewpoint for a bubble that is being formed very slowly, it can be assumed that the pressure

inside is constant everywhere. The hydrostatic pressure in the liquid is designated by

. The change in pressure across the interface from gas to liquid is equal to the capillary pressure; hence,

Finally, the difference in the top and bottom pressure equal the change in hydrostatic pressure:

Liquid foams can be used in fire retardant foam, such as those that are used in extinguishing fires, especially oil fires.

In some ways, leavened bread is a foam, as the yeast causes the bread to rise by producing tiny bubbles of gas in the dough. The dough has traditionally been understood as a closed-cell foam, in which the pores do not connect with each other. Cutting the dough releases the gas in the bubbles that are cut, but the gas in the rest of the dough cannot escape. When dough is allowed to rise too far, it becomes an open-cell foam, in which the gas pockets are connected. Now, if the dough is cut or the surface otherwise broken, a large volume of gas can escape, and the dough collapses. The open structure of an over-risen dough is easy to observe: instead of consisting of discrete gas bubbles, the dough consists of a gas space filled with threads of the flour-water paste. Recent research has indicated that the pore structure in bread is 99% interconnected into one large vacuole, thus the closed-cell foam of the moist dough is transformed into an open cell solid foam in the bread.

The unique property of gas-liquid foams having very high specific surface area is exploited in the chemical processes of froth flotation and foam fractionation.

Solid foams are a class of lightweight cellular engineering materials. These foams are typically classified into two types based on their pore structure: open-cell-structured foams (also known as reticulated foams) and closed-cell foams. At high enough cell resolutions, any type can be treated as continuous or “continuum” materials and are referred to as cellular solids, with predictable mechanical properties.

Open-cell-structured foams contain pores that are connected to each other and form an interconnected network that is relatively soft. Open-cell foams fill with whatever gas surrounds them. If filled with air, a relatively good insulator results, but, if the open cells fill with water, insulation properties would be reduced. Recent studies have put the focus on studying the properties of open-cell foams as an insulator material. Wheat gluten/TEOS bio-foams have been produced, showing similar insulator properties as for those foams obtained from oil-based resources. Foam rubber is a type of open-cell foam.

The earliest known engineering use of cellular solids is with wood, which in its dry form is a closed-cell foam composed of lignin, cellulose, and air. From the early 20th century, various types of specially manufactured solid foams came into use. The low density of these foams makes them excellent as thermal insulators and flotation devices and their lightness and compressibility make them ideal as packing materials and stuffings.

An example of the use of azodicarbonamide  as a blowing agent is found in the manufacture of vinyl (PVC) and EVA-PE foams, where it plays a role in the formation of air bubbles by breaking down into gas at high temperature.

The random or “stochastic” geometry of these foams makes them good for energy absorption, as well. In the late 20th century to early 21st century, new manufacturing techniques have allowed for geometry that results in excellent strength and stiffness per weight. These new materials are typically referred to as engineered cellular solids.

A special class of closed-cell foams, known as syntactic foam, contains hollow particles embedded in a matrix material. The spheres can be made from several materials, including glass, ceramic, and polymers. The advantage of syntactic foams is that they have a very high strength-to-weight ratio, making them ideal materials for many applications, including deep-sea and space applications. One particular syntactic foam employs shape memory polymer as its matrix, enabling the foam to take on the characteristics of shape memory resins and composite materials; i.e., it has the ability to be reshaped repeatedly when heated above a certain temperature and cooled. Shape memory foams have many possible applications, such as dynamic structural support, flexible foam core, and expandable foam fill.

Integral skin foam, also known as self-skin foam, is a type of foam with a high-density skin and a low-density core. It can be formed in an open-mold process or a closed-mold process. In the open-mold process, two reactive components are mixed and poured into an open mold. The mold is then closed and the mixture is allowed to expand and cure. Examples of items produced using this process include arm rests, baby seats, shoe soles, and mattresses. The closed-mold process, more commonly known as reaction injection molding (RIM), injects the mixed components into a closed mold under high pressures.